SpeedTools is a mod that was conceived to make speedrunning Outer Wilds more accessible.

Outer Wilds has a complex physics engine that calculates celestial orbits in real time. This and other game mechanics make certain aspects of the speedrun very time-sensitive and difficult to master. New runners may struggle to set up key timing windows to practice skips or ideal flight patterns.

We have devised a series of practice states, inspired by emulator save states, that use a combination of teleportation, time acceleration, and "cheats" to set up the player to practice different sections of the speedrun. For now, our practice states follow the Normal Any% category, but we hope to expand to fully support other categories.

We owe a debt of inspiration to the very useful Cheats Mod, which should be compatible with our mod for those who wish to use both.

SpeedTools and its dependencies can be easily installed with the Outer Wilds Mod Manager:

Once the Nomai statue has been activated in a new expedition, a loop timer will appear in the bottom left corner of the screen: 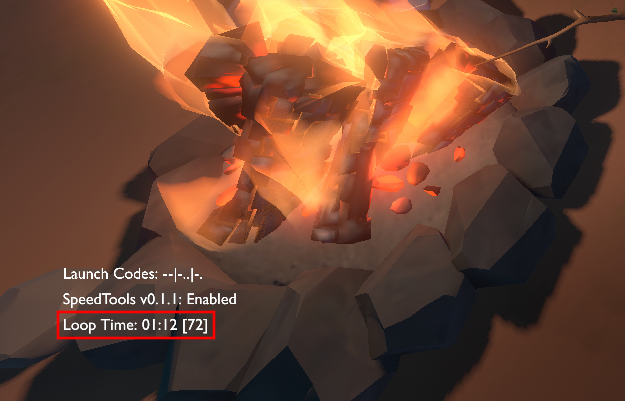 This has been included to help the player understand where they are in the supernova cycle. The timer can also be used to determine custom start times for practice states.

The timer sometimes persists on the title screen. We decided not to remove it because this screen also experiences a 22-minute death of the universe.

Speedup is a fairly uncontrolled feature. The toggle is responsive on the title screen, but not so much in the actual game due to the computational load of all the physics calculations being carried out. We recommend spamming ESC to cancel speedup if you use it. If you want to retain the ability to move and interact with the game, mods with less aggressive time acceleration exist (e.g., Alter Time by spacepiano).

Default keybinds have been chosen not to interact with Cheats Mod, which is commonly used in speedrunning, nor with the game itself. These keybinds can be customized in the mod menu, or by directly editing the file %AppData%\OuterWildsModManager\OWML\Mods\GrimLala.SpeedTools\config.json.

The input must be written with commas separating the key code names, e.g. Backslash,Numpad0 or A,B,C. These names are based on key locations for a standard American keyboard layout. The full list can be found in the Unity documentation.

This state places the player inside the Timber Hearth Observatory, near the entrance so that the Nomai statue skip can be practiced. If the mask cutscene has already been triggered, then Hornfels is removed from the scene so as not to obstruct practice. Infinite fuel is enabled by default so that the skip movement may be practiced over and over.

This state mimics sleeping for 6:45 so that the player can practice flying to the Hourglass Twins to obtain the warp core.

Sleep is a mechanic that increases Time.timeScale, the scale at which time passes in the game. We increase this value so that the player does not have to wait through a slower sleep cycle to practice this flight path. The rate at which the game carries out physics computations is core-bound, so there is a limit to how quickly time can pass that depends on a user's system specs, but speeding up time this way is typically faster than sleeping.

It takes about 5 seconds to fall asleep at the campfire, so we actually need to speed up time until 6:50, or 410 seconds. This time can be adjusted in the settings, and the loop timer can be used to help choose a desired time.

This state mimics warping out of the Ash Twin Project by 8:08 (488 seconds) to practice flying to Dark Bramble within an ideal time window. The player starts on the Ash Twin warp pad with a warp core in hand, and the player's ship is wedged under the bridge outside.

Just like the previous state, the loop timer must be active for this practice state to be called; and it may be called at any point before the start time has passed, but not after.

This state places the player just inside the Vessel with a warp core in hand. The player can practice inserting the core and entering the Eye coordinates, and then continue on to practice Vessel clip. Once the warp to the Eye has been complete, this state cannot be called again; but it can be called immediately after starting a new expedition.

This state places the player inside the Vessel next to the navigation console with the warp core inserted (it's invisible, but it's there) and the Eye coordinates already entered. Vessel clip is ready. Once the warp to the Eye has been complete, this state cannot be called again; but it can be called immediately after starting a new expedition.

Note: There seems to be some loading of the next scene happening in the background. If you are getting stuck in a black void and not getting fully warped, try waiting a little bit before triggering the warp.

This state places the player just above the loading zone for the Quantum Observatory so the final segment of the speedrun can be practiced.

You can make the player clone appear more quickly if you can find a cluster of three large trees, in a process described in thestrangepie's Any% guide. We have placed a bright orb (toggled with ] + 6) in the middle of this cluster to help new runners learn its location more easily.

DLC: Inside the Stranger

This state teleports the player directly inside the Stranger without them having to fly there and pass through the airlock.

The teleport position can be specified in the config menu. As long as the start time is set to 0, the state can be called multiple times without restarting the loop, so you can teleport to multiple locations in the same loop. The position has to be inside the Stranger's interior, though; the Stranger and Dreamworld locations require a bit of extra effort to load correctly, and we're not sure yet what kind of states might be useful, so this is just an experimental feature for now.

We haven't currently removed the cloaking field that renders the static outer area of the Stranger invisible. If you want to interact with this area, the mod Visible Stranger by xen will make that a lot easier.

Note: If you teleport to other locations outside the Stranger's interior, you won't really be able to move because a centrifugal force will still be acting on you.

If there are specific sections of a run you would like to practice that are not covered by the above practice states, there is a way to create your own custom states. In the mod config menu you will find three custom states that you can configure to suit your needs.

Getting Info for a Custom Practice State

Custom states aren't very useful if you don't know when and where you want the player to be. To assist in gathering this information, a hotkey has been provided that will output the current loop time, current planet/body, and current position to the Mod Manager logs. Those values can then be used when configuring your custom practice states.

Outer Wilds was not developed with the intention of supporting some of the disjointed warps and scene transitions that we've coded into our practice states. If you encounter an issue like getting stuck in a black void or immediately dying from collision, just try again. If the issue persists, try giving the game an extra second to load before you press the practice state button.

We haven't tested every scenario, so if you are having repeated issues, let us know! You can discuss the problem here on GitHub, or contact us through the Outer Wilds Modding community on Discord: grimsalad#0004 & LordLala#0052.

a mod to assist with learning Outer Wilds speedruns